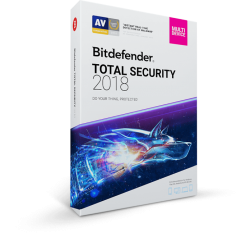 Bitdefender, the innovative security solutions provider, has released its 2018 consumer line. Bitdefender consumer solutions, which detected the devastating Wannacry and Petya ransomware from the start and protected all users, now makes it even tougher for cyber criminals. Customers will benefit from its 9th generation of machine learning and artificial intelligence-based technologies that have been premiered and developed since 2008.

Bitdefender Total Security 2018 gives home users elite security and ensures personal privacy in today’s world of sophisticated hacking attacks, while staying true to the company’s reputation of a feather-light footprint that won’t slow your computer down.

The new generation of the award-winning line introduces a multi-layer defense against ransomware, the malware outbreak that’s evading many detection filters and encrypting users’ documents then demanding ransom to decrypt them. Advanced Threat Defense finds patterns of behavior to detect and block even the newest threats while Real Time Protection instantly stops all known threats. As an additional protection, the new Safe Files feature prevents unauthorized alterations to sensitive files.

User privacy, a growing concern among users in an era of state-sponsored espionage, mass data theft and the proliferation of hackers, is enhanced in the latest Bitdefender product line, with innovations such as Webcam Protection that prevents webcam spying, fending off snoops, blackmailers and others.

The new Firewall makes it easy for non tech savvy users to take full advantage of this essential safety feature. Account Privacy for iOS and Android checks if any of your e-mails have been leaked, and may be used in subsequent targeted attacks or for extortion.

“The daily risks to users are more serious now that at any point in history, and Bitdefender is rising to the occasion with its 2018 consumer security product line,” said Bitdefender’s Vice President Consumer Solutions, Ciprian Istrate. “Bitdefender 2018 advances the company’s philosophy of protecting its customers with a layered approach against all major threats, from privacy loss to ransom demands.”

Bitdefender, trusted with the security of 500 million users worldwide, delivers its tried and true Password Manager, Secure Browsing and a wide array of other features that offer comprehensive and convenient security in Antivirus Plus, Internet Security and Total Security.

Bitdefender’s consumer line leads independent testing by security analysts, proving its ability to fight threats better than any other security solution. For the past six years, Bitdefender has dominated testing by the renowned AV-TEST, receiving awards for Best Performance and Best Protection, as well as top accolades from independent test lab AV Comparatives.