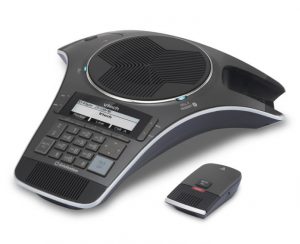 “Day-to-day business operations for companies, both large and small, consist of numerous over-the-phone meetings and conference calls,” said Graham Williams, vice president of business phones and hospitality at VTech. “With the two newest additions to the ErisStation family, companies of any size can now consolidate multiple phone systems into a single device, providing versatility in a workplace and conference room environment.”

The VCS752 satisfies the need for a personal workplace deskset and conference phone, without the purchase of two separate systems. Bluetooth and DECT headsets can be paired with the speakerphone, providing hands-free support. Additionally, users can connect their personal cell phones to the speakerphone via Bluetooth, providing a seamless transition from cell phone originated calls to a fully functioning speakerphone. For small conference rooms, the VCS752 includes one fixed built-in mic and two wireless mics with Orbitlink Wireless Technology™, providing support for up to nine or more participants. With its user-friendly interface, large backlit display, three soft keys and navigation pad, the system makes business calls even more efficient. The included wireless microphones give users mobility during calls, and the conference phone’s built-in charging bay keeps the wireless microphones together and fully charged for the next call. The VCS752 provides support for up to three SIP lines or accounts, allowing the management of multiple calls via the system’s advanced call-handling features.

By pairing the VCS752 with up to three VCS850 expansion wireless speakerphones, the phone system can easily scale to 27 or more active participants in medium-sized to large conference rooms. Each expansion wireless speakerphone features two built-in mics that offer full-duplex support, ensuring that participants on both ends of the call can hear clearly.

It’s easy to add VCS850 speakerphones to the VCS752 system because there are no wires or complicated cords. Both the VCS850 speakerphones and VCS752 wireless microphones provide 12 hours of talk time on one charge, making them suitable for longer meetings. Team members in businesses of any size can now spread out, hear clearly and speak without shouting.