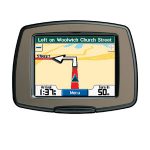 Garmin’s StreetPilot c310 is a great GPS device, if you’re not looking for all the extras, such as Bluetooth technology, MP3 player, etc. It’s simply a navigational system without all the frills. Still, it’s reliable navigation for a lower price than those with all the extras. The 2.8 inch by 2.1 inch display screen may sound too small for some people, but the display is clear and easy to read for the small size. It’s also a compact unit, small enough to move with you from car to car.

A few minor problems noted are that it doesn’t always give you the best route, just the shortest one. This sometimes leads to traveling downtown, instead of bypassing around town, which may be a problem if you really want to avoid downtown traffic.

The navigation is easy, just touch the screen to enter your destination, and you get directions in a 2D or 3D map, with turn by turn voice instructions. It does not, however, give you the street names, only the distance to turn. This may be a glitch for those who are used to the announcing of street names. Also, if you happen to be at an intersection with several turns, you may need to rely more on your intuition than the voice prompts. It is easy to use, almost no learning curve.

It does come with a base map, but no downloaded maps. So you would need to upgrade for this option. The City Navigator NT street maps are via a 259 MB SD card, and are for one European region. If you’re looking for a preprogrammed unit that requires no downloads, you would want to consider the next in the StreetPilot series.

The power comes from a rechargeable lithium ion battery that holds it charge for up to 8 hours. The unit isn’t as compact as the Nuvi series. Still it weighs only 9.45 ounces, and can be taken from vehicle to vehicle easily. However, the charger plug does hook into the mount, and not the unit itself. So moving the mount would be required for multi-vehicle use, unless you opt for a more portable mount.

Overall, if you just want a navigational device, and not a Bluetooth, MP3 player, etc., then the StreetPilot c310 is very reliable for the cost. If all you really need to do is travel, without all the frills, then this one may just be the one.

Sold exlusively in Europe, the portable StreetPilot c310 includes a preprogrammed SD card with detailed maps for one European region or country. Like all members of the c300 series, c310 featues intuitive touch screen operation and a big display, making it easy to use.

StreetPilot c310 offers everything you want in a car navigation system including automatic routing, crystal clear voice guidance, address lookup, 2D or 3D maps and an extensive database of points of interest. Simply touch the color screen to enter a destination, and the c310 takes you there with turn-by-turn voice directions. It also accepts custom points of interest (POIs) such as school zones and safety cameras and lets you set proximity alerts to warn you of upcoming POIs.

StreetPilot c310 comes with a 256 megabyte (MB) SD card preloaded with City Navigator® NT street maps for one European region. Just plug the card into the c310 card slot and go. Looking for a preprogrammed unit with no downloads and full European coverage? Try the StreetPilot c330 or c340 which come with preloaded maps for added convenience. The StreetPilot c310 also includes a standard basemap covering all of Europe, so you can still travel outside the programmed card’s coverage area using major roads.

Take It With You

The portable c310 easily moves from vehicle to vehicle. Its suction cup windshield mount is a snap to install. The c310 also comes with a rechargeable lithium-ion battery for out-of-car route planning.

StreetPilot c310: Where to?

What’s in the Box:

Package contents may vary per version. See your local dealer for more information.